In an election year there is nothing more important to incumbent politicians than an unemployment rate that is dropping. For challengers a rising unemployment rate is a key to victory. This is an unspoken but real mantra in politics. Thus pundits of whichever side will cherry pick numbers that appeal to their position, leaving the public confused at best, and at worst ever more jaded.

Currently the unemployment rate, according to the Bureau of Labor and Statistics (BLS) is 8.1%, down .2% from July. That’s a net of 12.5 million people without work. It includes 368,000 people that are no longer counted. But how real is this figure?

According to the same BLS August report, 2.6 million are not included as they are marginally employed. That’s because these people have not looked for a job in the past 4 weeks. So instantly the real unemployment rate increases to 15.1 million (which is 4.8% of the population of 311 million Americans or 10.5%, out of 142 million, of the total workforce as per US Debt Clock). Generation Opportunity – a non-profit, non-partisan organization in the United States engaging and mobilizing young Americans – claims that another 1.7 million young adults are not counted by the BLS. Bringing the total to 16.8 million unemployed.

The key here is that the unemployment rate quoted by the Government each month is not a real figure, but an estimate meant to give a feel for the real situation in the nation. This is driven home by the fact that the unemployment rate is determined by a random phone survey of Americans to determine how many are working, looking for work, or ‘discouraged’ as the Government defines it.

So what is the real figure?

According to the Union of Unemployed Workers, the actual unemployment number is 27.6 million for an unemployment rate of 17.1% (down from July at 17.2%). This is from a union, whose purpose is of course to gain members so these figure are suspect. Nor is there a direct citing of how these figures are derived.

The divergence, according to US Debt Clock, is currently 81.6% higher than government figures. This exceeds the next highest divergence, 69.5% for 2004.

Looking at it from a different view, the total civilian labor force is 154.6 million. That is down from last month, July and June. It is better than a year ago by just under 1 million. A slim improvement annually, until you look at the number of people actively working. That’s called the participation rate.

The participation rate is down meaning the number of people working compared to not working is diminishing. This is the bulk of where taxes are raised from, and a lower number means fewer dollars to pay for government spending and thus a greater need to borrow money and increase the national debt and/or increases in taxes. 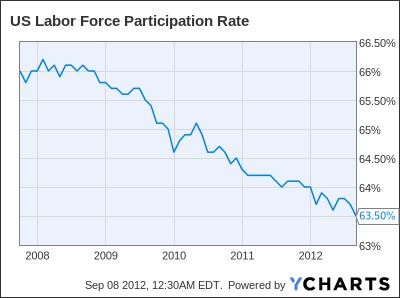 Thus we can conclude several things:

Born in 1968, a political commentator for over a decade. Has traveled the U.S. and lived in Moscow and Tsblisi, A former stockbroker and 2014 Congressional candidate. Passionate about politics with emphasis on 1st and 2nd Amendments.

Thank you for lending your voice. We appreciate hearing what you have to say. Cancel reply


Help us bring you more news and events, faster. Donate $2 (or more if you like)

You will celebrate the holidays (Christmas, Thanksgiving, Hanukkah, ect) ...